Warning: Use of undefined constant php - assumed 'php' (this will throw an Error in a future version of PHP) in /nowsza/web-old/wp-content/themes/sparkling/content-single.php on line 8

Andrzej Bazylko started his adventure with Aikido in October 1987. In October 1991, he began teaching aikido, and in September 1996 founded Aikido Andrzej Bazylko. He’s a regular teacher there, directs numerous seminars, summer and winter camps. He taught Aikido and Kenjutsu in Japan, France, Great Britain, Spain, Portugal, Turkey, Azerbaijan and United Arab Emirates. Kashima Shin Ryu master sensei Minoru Inaba offered him Kashima Shin Ryu chuden in April 2009. He was nominated to 5 dan aikido Aikikai by Doshu Moriteru Ueshiba in January 2010. He became a member of the Technical Committee of the Polish Federation of Aikido in February 2014. 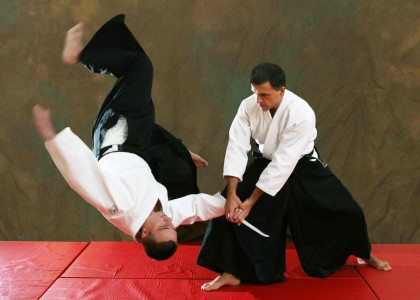 He has made his first trip to Cercle Christian Tissier in Vincennes in September 1990. Then he returned there many times. First alone, but later with his disciples. He decided to study aikido under direction of sensei Christian Tissier (8 dan aikido Aikikai), who accepted him as a disciple.

Mastering the techniques of Christian Tissier sensei would not be possible without the help of his outstanding student Pascal Durchon (6 dan Aikikai aikido), who is  Andrzej Bazylko‘s friend for years. Joint training sessions, discussions, readings have deepened the passion and let discover the secrets of Budo. They facilitated the understanding of teaching of Minoru Inaba sensei.