Warning: Use of undefined constant php - assumed 'php' (this will throw an Error in a future version of PHP) in /nowsza/web-old/wp-content/themes/sparkling/content-single.php on line 8

He’s one of the best disciples of Christian Tissier sensei (8 dan aikido Aikikai). He is 6 dan Aikido Aikikai and chuden Kashima Shin Ryu. He was a chairman of Collège Technique National FFAAA (Technical Commission of the French Federation of Aikido FFAAA), in which he is co-founder and one of the leaders of local and international preparatory seminars for people who applies for 3-4 dan. He participates in the instruction of federal examiners and belongs to the committee conducting the exams for future instructors and technical examinations for grades 1-4 dan. He is a member of Commission Spécialisée des Dans et Grades Equivalents CSDGE (Specialized Commission for Dans and Equivalent Grades). He is FFAAA technical director of Central Region – Loire Valley and was a vice-president of the International Budo Association Shiseikan ISBA – an organization which brings together clubs interested in teaching of Kashima Shin Ryu master sensei Minoru Inaba (8 dan Aikido Aikikai ). He teaches at Puteaux, Eragny-sur-Oise and Carrière-sur-Seine and gives numerous seminars in France, Poland, Germany and England. 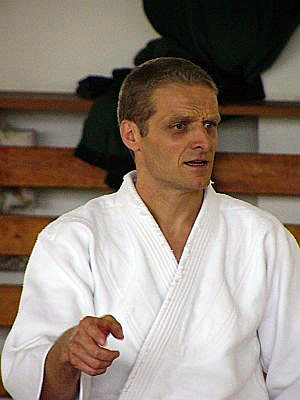 Pascal Durchon came to our country  for first the time in 1990 together with Christian Tissier. He has come to Poland for many years at sensei Bazylko‘s invitation. Led 28 seminars in Warsaw, including the last seminar in January 2013. Sensei Bazylko and his disciples often stayed at his dojo in Eragny and enjoyed his hospitality during stays at the dojo of Christian Tissier in Vincennes.

Sensei Bazylko could participate through his mediation in a number of seminars and other relevant events from the world of aikido, held in France. Due to Pascal Durchon‘s invitation he was a participant, and also a co-teacher of preparatory seminars for people who applied for 3-4 dan. He could participate in many discussions of persons with superior technical skills. Pascal Durchon and instructors working with him invited sensei Bazylko to teach at departamental seminars in France. He has the honor to offer special kenjutsu classes for Pascal Durchon‘s best disciples. Sensei Bazylko‘s experience and skills would be now much smaller without his help.